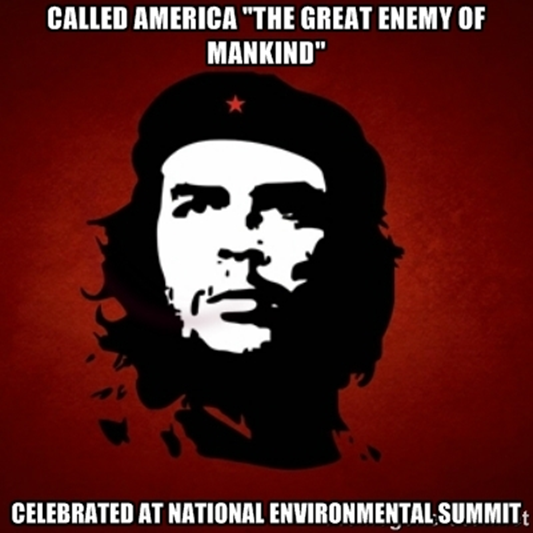 It’s no secret that many U.S. environmental groups have become more strident and ideological during the Obama presidency. But you may be surprised just how extreme they have become.

In early October, a national network of environmental groups – called Stop the Frack Attack (STFA) – held a summit in Colorado to discuss their campaign strategies. The STFA alliance is led by Earthworks and includes other well-known national activist groups, such as the Sierra Club, Natural Resources Defense Council and Food & Water Watch. Dozens of smaller groups, which routinely serve as the face of national groups in state- and local-level campaigns to ban domestic energy production, are also part of STFA.

According to The Colorado Statesman, STFA advisory council member Shane Davis opened the summit with a speech invoking the memory of a historical figure, but it wasn’t an environmentalist like John Muir or Rachel Carson. As the Statesman reported:

[Davis] encouraged the anti-fracking movement to draw inspiration from Argentine Marxist revolutionary Che Guevara, a leading figure in the communist overthrow of Cuba.

“This is the time when we need to shake the political and economic fracking industry’s empire and their rule over global fossil-fuel energy consumption,” Davis said. “Fifty years ago, Che Guevara, a revolutionary humanitarian, fought similarly against ruling forces that were harming local communities.”

Ernesto “Che” Guevara, the humanitarian? Flimsy left-wing folklore and T-shirts emblazoned with Guevara’s face may have built a myth around the man, but they cannot change history. Guevara was one of Fidel Castro’s top henchmen in Cuba and a man who sowed violent extremism across Latin America in the 1950s and 1960s. According to The Economist:

Guevara was a ruthless and dogmatic Marxist, who stood not for liberation but for a new tyranny. In the Sierra Maestra, he shot those suspected of treachery; in victory, Mr Castro placed him in charge of the firing squads that executed “counter-revolutionaries”; as minister of industries, Guevara advocated expropriation down to the last farm and shop. His exhortation to guerrilla warfare, irrespective of political circumstance, lured thousands of idealistic Latin Americans to their deaths, helped to create brutal dictatorships and delayed the achievement of democracy.

Author Paul Berman, writing in Slate magazine, has called Guevara a “totalitarian” and an “enemy of freedom” who achieved “nothing but disaster.” Even Time magazine – which has been accused of fueling the Guevara myth – concedes he was a “war criminal.” Just how extreme was this guy? He considered the United States of America to be “the great enemy of mankind,” and according to his biographer, Jon Lee Anderson, Guevara would have ended the 1962 Cuban Missile Crisis by firing nuclear weapons on the U.S. That didn’t happen, thankfully, because the Soviet Union refused to give control of the weapons it placed in Cuba to Guevara and the rest of the Castro regime.

So, when the Statesman caught STFA organizers opening their national summit with a tribute to a violent Marxist revolutionary, did they engage in damage control? After all, this was no gathering of misguided college students. The environmental groups on STFA’s steering committee have combined revenues of more than $170 million a year, and these organizations are constantly lobbying Obama administration officials, federal lawmakers and state and local officials to write laws and regulations the way they want. Revealing themselves as throwbacks to the radical left of the 1960s may threaten their ability to be taken seriously today, to say the least.

But the members of the STFA alliance didn’t downplay the Guevara tribute at all. They embraced it. They promoted the Statesman story over social media and in their compilation of “media hits.” They even bragged on their website: “We escalated the fight between the oil and gas industry and communities.”

If these groups want to ignore the facts and idolize a Marxist revolutionary who fought on the losing side of the Cold War, that is their right. But it shows that today’s environmental groups occupy the fringes of the political debate in this country, which is something that voters and responsible public officials – Republican, Democrat and Independent – deserve to know.