In this episode of Liberty Chats, we speak with Jorge Galicia, a Christian, lawyer and freedom fighter from Venezuela.

Before socialism devastated his country, Jorge lived a life not unlike that of middle-class Americans. He is now one of 4 million Venezuelans who have fled their country following its economic, social and political collapse. Since then, he has been speaking out about the very real damages caused by socialism and has made it his life’s mission to win the fight. 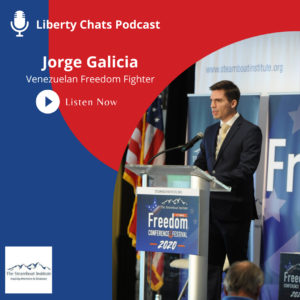 Jorge Galicia is an Outreach Fellow for The Fund for American Studies and is a former speaker at the Steamboat Institute’s Freedom Conference. He is a sought after speaker and leader across the country.

Watch our interview via video here:

Check out our past episodes below: